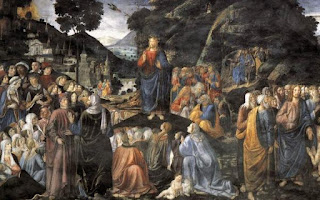 Photo courtesy of thinking faith.com
On the rare occasion where I have seen Fox News I have noticed that whenever anyone was in the news doing good for society, the country, climate change or anything that would benefit society,  Fox would attack them mercilessly.  The latest attack was on Prince Harry and his wife Meghan, where Fox condemned them for flying on a private jet to attend a conference on climate change held in New York City.  When is the last time you saw Fox’s savior, Donald Trump fly commercial?
After seeing this fact I thought of how Fox would interpret The Eight Beatitudes from Christ’s Sermon on the mount.  Here is the way Fox would present the beatitudes.

1. Blessed are the poor in spirit, for they are lazy and deserve to be poor.

2. Blessed are those who mourn, for they should get over it.

3. Blessed are the meek, for they are losers.

4. Blessed are those who hunger and thirst for righteousness, for they are socialists.

5. Blessed are the merciful, for they are weak.

6. Blessed are pure in heart, for they are fake.

7. Blessed are the peacemakers, for they shall be called suckers.

8. Blessed are they which are persecuted for righteousness sake, for they are not real Americans and deserve it.

Thank you Fox News and the Republican party for telling us what Christianity really is all about!