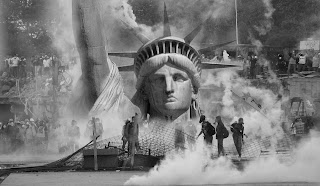 Image by Engin Akyurt from Pixabay

Like millions of people all over the world, I watched in horror, sadness, and disgust as the United States Capitol building was taken over by insurrectionists goaded on by the President of the United States. For the first time since the War of 1812 the Capitol was captured, not by a foreign enemy, but by domestic terrorists. For the first time since the Civil War, the confederate flag, a symbol of racism, hate, and insurrection was present in the Capitol, where the bodies of patriots like John F. Kennedy, Abraham Lincoln, John McCain, and John Lewis have lain in state.

For hours Trump’s militia roamed, ransacked, and even urinated and defecated in the halls of the people’s Capitol, without opposition. While this was happening, Donald Trump and his family and most ardent supporters watched gleefully from the confines of a secure bunker in the White House. This is what Trump wanted. Chaos and violence.

Trump’s coup failed, but it came so shockingly close to succeeding! How in the hell did this happen? With the hundreds of millions of dollars this country spends to defend our country and Capitol, a bunch of deplorable, ignorant, deluded, cult followers was able to invade and occupy the seat of our government, with ease. They did not do it alone. Someone financed, planned, assisted, and encouraged this coup. At the top of this list definitely are Trump, Trump Jr., Rudy Giuliani, Michael Flynn, Ted Cruz, Josh Hawley, and all of those Republican members of Congress who have enabled Trump and spread his lies about election fraud. It’s becoming increasingly clear that the rioters were aided by some members of the Capitol police and other governmental law enforcement agencies. Even the acting head of the Department of Defense had a hand in preventing the calling up of the National Guard.

Amazingly at the end of the day on January 6, only a handful of rioters were arrested. Had this been a BLM demonstration hundred of correctional facility buses would be overflowing with prisoners and dead bodies would be littering the ground! Ah, the wonders of white privilege! Two days after the attempted coup more arrests have been made, but the Justice Department has declined to investigate the speakers who incited this unforgivable violence. It appears the instigators will go unpunished.

One would think that with this violence and the attempt to overthrow the electoral process the Republican members of Congress who helped encourage this insurrection would realize what their support of Trump had done to our democracy and support the Constitution. But no, they continued to spew their lies and conspiracy theories in an attempt to give Trump another term. They knew they would not succeed, but they grandstanded to please Trump’s base for political gain. Eventually, Biden was certified as the winner of the 2020 election, as expected.

Two days later investigations have just begun into how this attempted coup could have happened and who is responsible. Calls for the removal of Trump, either from invoking the 25th Amendment or another impeachment, have been growing. But only the Democrats are calling for Trump to be held accountable for his failed coup. Only one Republican has joined the Democrats in calling for Trump’s removal. Cowardly Mike Pence has refused to invoke the 25th while some members of the Cabinet have resigned, so they would not be forced to vote against Trump. Republicans in the House and Senate have stated that they would not support removing Trump through impeachment. They would rather risk our democracy and the lives of our citizens than to go against Trump!

People have argued that there are only less than two weeks before Trump leaves office and it is a waste of time to attempt to remove him before then. They say, “what can he do in 13 days?”. The answer to that should be clear looking back to January 6th. He still has the nuclear codes, he still is Commander-in-Chief of the armed forces, he can still start a war, he can still incite his cult members to attack the Inauguration. And he can run again in 2024.

Trump will be out of office on January 20, but he won’t be gone. In the next few days, if he is not impeached or removed he will pardon himself for all crimes he has committed during his tenure and for those he could or will commit before Biden becomes President. In other words, he will be free to continue to wreak havoc upon or country.

We must remember that Hitler or any other dictator did not succeed in their first try at seizing authority. They did not give up and admit defeat and neither will Trump. He and his followers will always be with us unless they are held accountable. Those in public office, those in the Republican party, and those in his administration must be held accountable and imprisoned for treason. And yes, I also hold those people who have voted for him and continue to support him partially responsible for laying the groundwork for this attempted coup. And just as guilty, are those of our citizenry who “don’t like to get involved in politics”. You are also responsible for Trump and Trumpism. Your silence was and is a form of encouragement for Trump.

Sadly I don’t believe that Trump and his enablers will be held accountable. Trump will not resign or admit defeat. Those reprehensible insurrectionists who took over the Capitol will know that in reality, they had gotten away with an attempted coup and lived another day to fight again. The next time they will succeed.