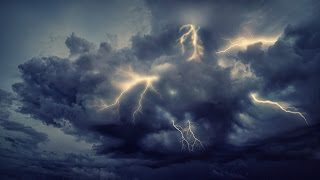 Image by jplenio from Pixabay

The long-range forecast is foreboding. Not the weather forecast, but the election forecast. The polls show Biden winning, even in most swing states, but the election is still a little under 50 days away and anything could happen. Anything disastrous and unprecedented that is. Trump is like a cornered rabid animal who will stop at nothing to win. He has to win to ensure that he, his family members, and his enablers will not end up in prison. He will risk your life, my life, and the lives of countless other Americans to achieve his victory.

His campaign has apparently run out of money and has been forced to remove television advertising from crucial states. He knows that he has a slim chance of winning in an honest and fair election. He needs Putin and Russia now, more than ever. He also needs his fixer, Bill Barr, to attack and discredit his opponents and to prevent a fair vote. His Postmaster General toadie has already started to cripple the postal service to hinder mail-in voting. And that’s just the tip of the iceberg. There is going to be a subversion and a perversion of the legal system to support Trump’s re-election. There are going to be all kinds of attempts to block Black people from voting, especially in the South. The closer we get to November 3rd the more attacks on our elections and legal system will be realized. You can bet your bottom dollar that Bill Barr and Trump’s Justice Department have already formulated the “October Surprise” to favor Trump. Whether it is a fake Covid-19 vaccine or a fake investigation of Obama for a “Trumped-up” imaginary charge, rest assured it’s coming. We should also be prepared for violence erupting in our major cities, especially those run by Democratic mayors. We all know how Trump loves to foment chaos.

Most of us look forward to November 3rd as the day of deliverance from the evils of the Trump crime syndicate, but most likely we will be far from delivered from the hate and cruelty of Donald Trump and his cult of supporters. Election day is going to be just the beginning. Hopefully, it won’t be the beginning of the end.

If Biden wins, even by a landslide, Trump will not give up. And his supporters won’t give up. Even with the knowledge that Trump has trashed and dishonored our veterans and war dead and the tapes of Trump admitting he purposely downplayed the seriousness of Covid-19, his followers are still firmly behind him. They refuse to believe anything negative about their Fuhrer. These people only watch Fox News and are totally unfamiliar with the truth, or anything resembling it.

Trump, knowing that his defeat may be inevitable, has begun floating the idea that the election results will be fake and signaled his refusal to accept the results. Many political veterans believe that Trump may refuse to leave the Oval Office on January 20. Trump has often stated that he “deserves” a second and even a third term. He has stated, “that the only way he will lose the election is if it is rigged”. He is preparing his lemmings for his defeat. He has also encouraged people to vote twice, only because he then can call the election invalid.

Roger Stone, convicted felon and Trump friend, and supporter whose sentence was commuted, recently called for Trump to declare martial law if he loses and to arrest Mark Zuckerberg, Tim Cook, and the Clintons. Trump’s assistant secretary of Health and Human Services has warned of “an armed revolt” if Trump loses. As the Daily Mail has reported, “Donald Trump says he will put down ‘INSURRECTION’ if he is declared the winner and there are riots on election night”.

While a majority of the country may be hoping and planning on celebrating a Biden victory, small, albeit violent extremist elements of Trump supporters are planning on bloodshed. Who will be the targets? Everyone they perceive to be Trump’s enemies. In other words, anyone not a white supremacist.

Trump will not think twice about destroying the Constitution, the Country, and the lives of Americans to remain in power. Be prepared for horror yet to come.

This story was originally published by me in The Militant on Medium.