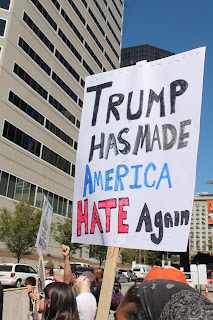 Let’s face it. Trump was not elected by a majority of the American people. He lost the popular vote by quite a large margin, but won in the antiquated Electoral College. which represented Trump’s base.
And who are Trump’s base? According to The Washington Examiner Trump’s base is comprised of 24% of the American electorate.  And who are these 24%? This includes white supremacists, racists and bigots, predominantly.  Christian Evangelicals, who are basically racists and bigot are well represented in his base.

Since his inauguration Trump has served his base well with his attacks on Muslims, women, the LGBT community, immigrants, and people of color.  He has tried to stop the immigration of Muslims and people from Hispanic and non-white countries.  He has attempted to roll back civil rights gained by LGBT and other minority communities during the Obama administration and even before.  He now is attacking DACA, to satisfy his base, who want no immigrants in this country, even though their ancestors were immigrants.  In his first year as President Trump has managed to severely divide the country and instill hate among her citizens.  He has tried to blame all of the problems of the country on immigrants, especially Muslims and brown people. (Just like Hitler blamed the Jews for all of Germany’s problems).  He has employed white supremacists in the highest positions of his administration and even has a known racist as Attorney General.  He has even called Haiti and countries of Africa “shitholes” while questioning why we should allow their citizens to come here.  He has truly made America hate again by bringing us back 100 years.

He has done what his racist, white supremacist, bigoted base had wanted him to do.  So enough is enough.  He was elected to the Presidency to serve ALL Americans, regardless of the color of their skin, their religion, their national origin, their gender or their national origin. It’s now time to serve the other 76% of the American people! It’s time to get America back to being the America that she really is and let racists and bigots and haters go back under the rocks where Trump found them!