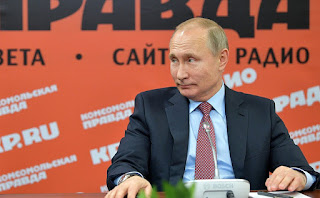 A lot of my friends are very confused and perplexed at why the Republicans in Congress simply sit back and let Trump destroy our democracy.  It is now a forgone conclusion that
Russia meddled in our 2016 elections, which most likely allowed Trump to become President.  Yet knowing this the Republicans are hampering and even attempting to block Special Prosecutor Mueller’s investigation into Russia’s involvement and the part the Trump administration may have played in these treasonous acts.  The media, except for the propaganda wing of the GOP, FOX News, have been scratching their heads trying to figure out why the GOP are doing everything in their power to discredit the investigation, the FBI, the Justice Department and the CIA.  Worse yet with the knowledge that Russia will definitely try to meddle in the upcoming 2018 elections, the Republicans have done nothing to rectify the situation.

All the political pundits are stymied as to why the GOP are trying to stop the investigation, except for a very few who think that they are trying to hide Trump’s guilt. But in my opinion the answer is quite obvious and simple.  The Republicans know they are going to lose big time in 2018 and they need and want Russia’s help in maintaining their majority!