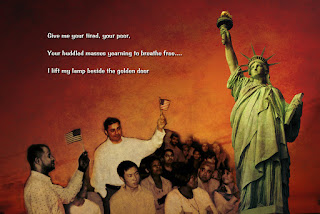 Flickr
Without an intelligent thought in his head the heartless and racist POTUS attacked millions of people who were brought to this country as children by destroying DACA (Deferred Action for Childhood Arrivals)!  Without thinking of the millions of families that would be destroyed, the huge negative affect on the economy and the future suffering of those people who would be sent back to a country they do not know, Trump ended DACA.  The sniveling coward didn’t have the balls to make the announcement himself,  so he sent out the country’s preeminent racist and repulsive rodent Jeff Sessions to gleefully make the announcement!
Sessions argues that these “DREAMers” took jobs away from Americans and that this country is a country of laws.  This coming from a KKK sympathizer who committed perjury by lying to Congress.  I’m sure that nothing pleased this vermin more than deporting millions of people who have too much melanin in their skin!
It’s disgusting to hear Trump supporters saying that these DREAMers have taken away college spots from real Americans who wanted to go to college.  They mean whites who were too damn stupid to meet the admissions requirements or who were too lazy to even try apply for college!  Remember that a large majority of Trump’s supporters are not college educated and actually think that a college education is bad for America!  It really boils down to the fact that a large number of these dreamers do not have white skin!
These DREAMers combined have to pay millions to retain their status and must not be convicted of a felony or serious misdemeanor.  They cannot receive welfare or any other governmnet assistance.  91% of these DREAMers are employed and pay billions of dollars in taxes.  This is probably a lot more taxes than Trump’s low life supporters pay!  Many States will see a drain of billions of dollars from their coffers if DACA is ended!  The crime statistics among DREAMers is lower that the general population.  According to the Cato Institute DREAMers are less likely to be incarcerated than native born Americans with the same age and education!
I’m sure Trump paid absolutely no attention to the effects that ending DACA would have on the economy or the on lives of those individuals and families. His main concern was that DACA was created by Obama! What a pathetic little man Trump is!