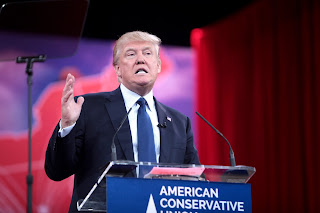 I haven’t been posting anything lately about the campaigns for the Democratic and Republican nominations for the 2016 presidential elections, mainly because I am so disgusted with American politics today. I am shocked and embarrassed by the degenerate nature of the GOP candidates and their debates. They have denigrated the office of the President as well as the current sitting president. Their vulgarity and potty mouth language is unacceptable in any civilized society and is a total embarrassment to the GOP and the entire country. For a party that touts their “family values” this behavior should not be witnessed by families with children or any civilized adult.

It’s no surprise that there are large number of racists and bigots in this country hiding just beneath the surface, but their voices have been subdued by those educated individuals possessing more common sense and higher moral standards.  Unfortunately, the voices of hate have found a leader in Donald Trump, who has allowed them to come out of the muck and mire and join his political movement. He has given the racists and bigots of this country a platform to espouse their hate. A student of history cannot watch his rallies, replete with a majority of uneducated low life and foul mouthed supporters, without looking back and seeing throngs of Hitler supporters giving the Nazi salute in response to their leaders loud vitriol!  During Hitler’s time the targets were Jews, but his time around the targets are Hispanics, Blacks, gays, immigrants and religious minorities. In other words anyone who is different.

The other candidates of the Republican party are not much better. They all are doing their best to demonize anyone who is not white, heterosexual, male, rich or Christian. It is sickening to see all of the candidates pander to the so called “evangelicals”. Evangelicals are just a religious sounding name to describe racists, bigots and hate mongers.  They are by no means Christian, as proven by their strong support of Trump, who is as far from being a Christian, with his actions and lifestyle.

I have lost all respect for the Republican party because of their choices of candidates. In each of their candidates I can only see people who want to take my rights away and force their archaic religious views down the throats of me and all Americans. Are the American people so stupid and ignorant that they cannot see that what the GOP candidates want are exactly what ISIS wants? It’s time to wake up America and be Americans!